Which country has the most tigers in the wild?

India accounts for 75 percent of the only 4,000 wild tigers left in the world; a sad testament to poaching for scientifically unproven medical benefits, trophy hunting and loss of habitat.

But India has made great progress in its conservation efforts through the work of the World Wildlife Fund, Wildlife Institute of India and the Indian National Tiger Conservation Authority. Tiger numbers grew from 1,411 in 2006 to 1,706 in 2010 and to 2,226 in 2014. Tiger numbers are expected to exceed 3,000 in the next census to be released in 2019. (Times of India)

India’s Royal Bengal Tiger is the largest and most powerful sub-species of the cat family. Male tigers are on average 9 feet in length and weigh 500 pounds. Female tigers are 8 feet in length and weigh 300 pounds. Celebrated by English poet, William Blake in his 1794 poem, “The Tyger,” you can see these majestic mammals “burning bright” in their “fearful symmetry” in India’s many Tiger Reserves. 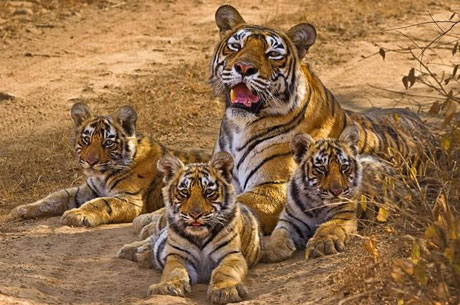 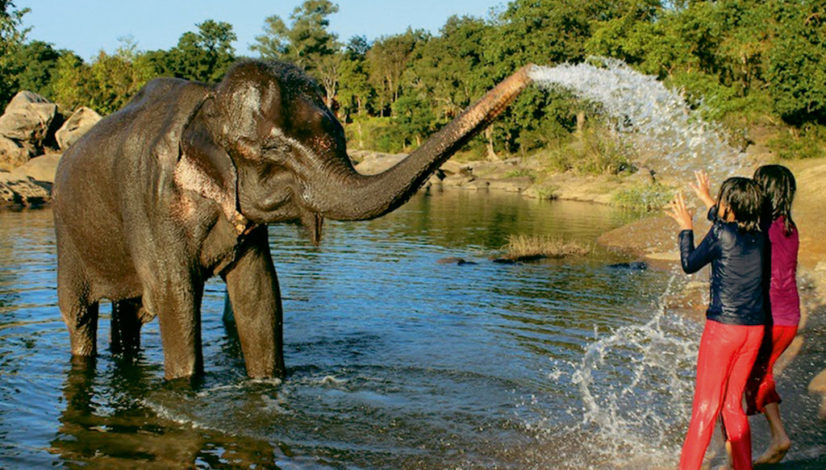 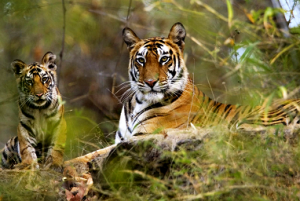 Kanha National Park has the honor of providing the setting for Rudyard Kipling’s classic novel, ‘The Jungle Book.’ Spread over 1,945 square kilometers, It is rich in lush saal and bamboo forests, lakes, streams and open grassland. The park is known for its tigers, swamp deer, buffalo, leopards, and an extensive variety of other animals and birds. The park’s landmark achievement is the preservation of the rare Swamp Deer also known as ‘Barasingha’ in Hindi, saving it from near extinction. 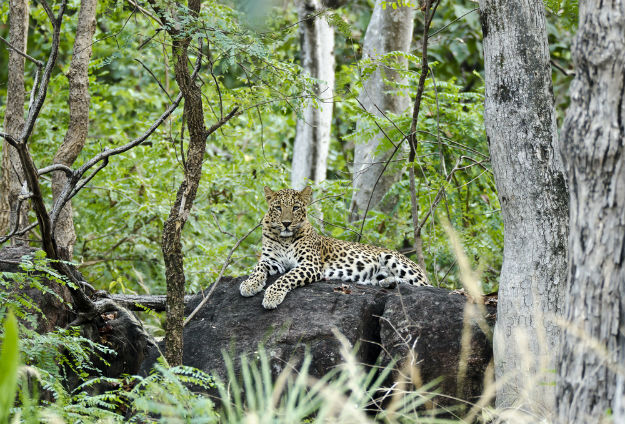 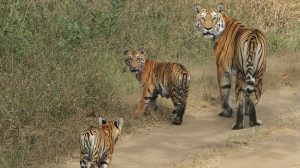 A place of wild natural beauty, Pench National Park has open hilly terrain, teak forests and thick vegetation. This park is renowned for river rafting and is a great place for bird watching. Tiger sightings are quite common on safari, along with many other animals, most notably the deadly Indian wild dog which is a rare but stunning sight. An additional attraction is the potters’ village that’s situated near the park’s Turiya Entrance Gate. Try your hand at the potter’s wheel or watch local artisans skillfully mold clay into exquisite artifacts. Bike or walk through Turiya Village, past lush fields and find yourself at the tranquil Kohka Lake. Take a picnic basket and watch the waterbirds as the setting sun colors the sky. 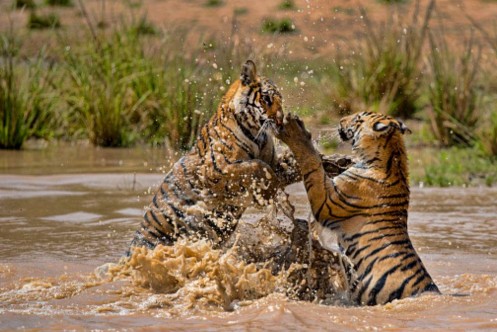 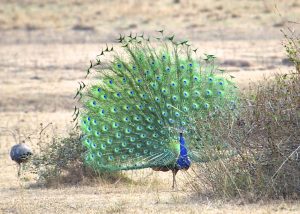 Bandhavgarh National Park is spread over 105 square kilometers with a 400 square kilometer buffer zone. The topography varies between steep ridges, undulating hills, forest and open meadows. It is best known for its tigers. As it was a hunting lodge for the King of Rewa, there is an ancient fort built on a 2,624 foot high cliff. The park is also home to 37 species of mammals, 250 species of birds and 80 species of butterflies, including leopards and various species of deer. Bandhavgarh dates back 2,000 years. You will also find caves with inscriptions and rock paintings.

And while in India, don’t miss Sasan Gir National Park, the home of the Asiatic Lion, the only place on the planet where these magnificent animals live. Due to India’s conservation efforts, lion populations have risen from 411 in 2010 to 523 in 2015, and to over 600 in 2018, brought back from near-extinction. 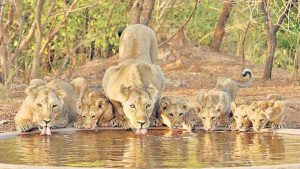 The largest compact tract of dry deciduous forest in India, Sasan Gir National Park is the home of the Asiatic Lion. The park covers an area of 1,883 square kilometers. The forest supports 606 different plant species, 39 species of mammals, 37 species of reptiles, over 300 species of birds and more than 2,000 species of insects. A breeding ground for migratory birds, a variety of raptors and other species such as Lesser Florican, Osprey, Indian Pitta, Red-headed Vulture, and more can be spotted. The forest also supports a variety of reptiles, including the Indian python and the Indian star tortoise, and possibly one of the highest populations of Marsh crocodiles in India. Gir also has one of the densest concentrations of leopards in India.

India is also home to numerous World Heritage Sites, both cultural and natural. The detailed carvings in marble, stone and wood created over thousands of years of history, set India’s temples, forts, palaces, and mausoleums apart along with architecture and early technology visible in stepwells, sundials, and more. 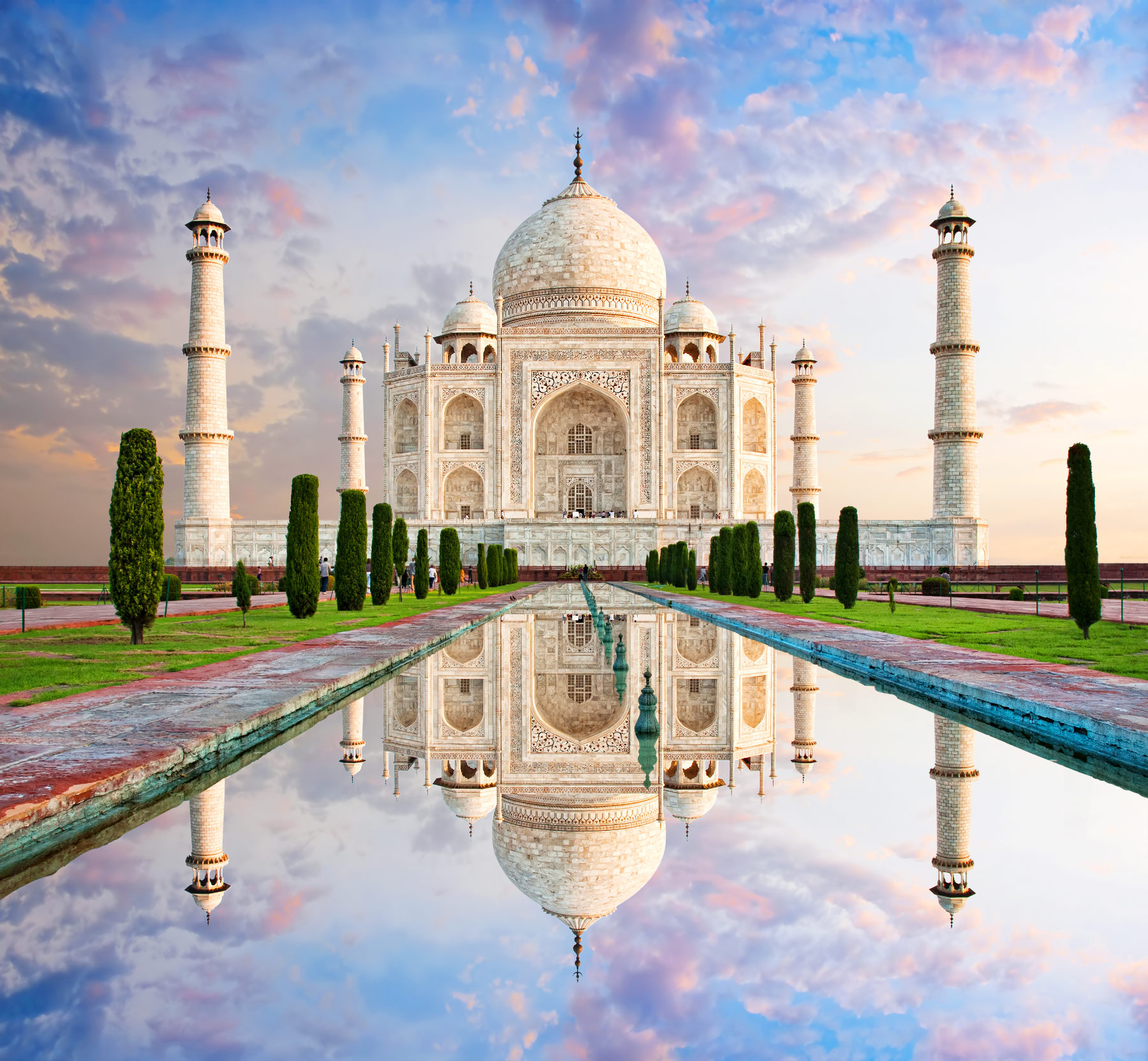 Built between 1631 and 1648 in honor of Arjuman Banu Begum, the wife of Mughal Emperor Shah Jahan, the Taj Mahal is often listed as one of the Wonders of the World and is a UNESCO World Heritage Site. The elaborate tomb of white marble is universally acknowledged to be the finest example of Mughal architecture, which combines elements of Indian, Persian, and Islamic styles. The Taj Mahal is exceptional for its monumental scale, stunning gardens, lavish ornamentation, and its overt use of white marble. 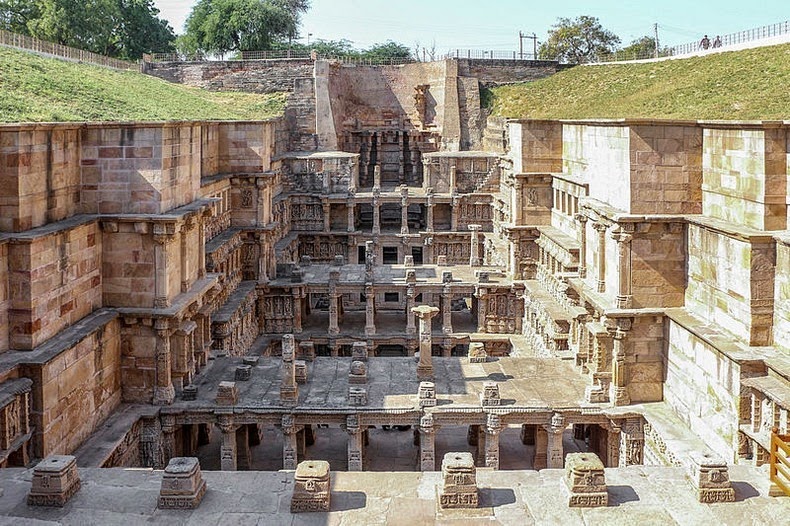 Stepwells are a distinctive form of subterranean water storage system constructed since the 3rd millennium BC. They evolved over time from a pit in sandy soil to elaborate multi-storey works of art and architecture. The Queen’s Stepwell was built in the 11th century AD. Designed as an inverted temple highlighting the sanctity of water, it is divided into seven levels of stairs with more than 1,500 sculptures adorning the temple with religious, mythological and secular imagery.

The Chhatrapati Shivaji Terminus, formerly known as Victoria Terminus Station, in Mumbai, is an outstanding example of Victorian Gothic Revival architecture, blended with themes from Indian traditional architecture. The terminus was built over 10 years, starting in 1878. It is an outstanding example of the meeting of two cultures, as British architects worked with Indian craftsmen to include Indian architectural tradition and idioms thus forging a new style unique to Mumbai. This is Mumbai’s busiest and still operational train station and a great place to experience the everyday life of people.

The Red Fort Complex was built between 1638 and 1648 as the new capital of the 5th Mughal Emperor of India, Shah Jahan. Named for its massive enclosing walls of red sandstone, the private apartments inside the fort consist of a row of pavilions connected by a water channel, known as the ‘Stream of Paradise.’ The Red Fort is considered to represent the zenith of Mughal creativity. Architectural elements reflect a fusion of Islamic, Persian, Timurid and Hindu traditions. The fort is divided into several sections including a public audience hall, private audience hall, private quarters of the emperor’s wives and mistresses, Turkish-styled baths, a courtyard specially designed for live music, a mosque, and more.

Fatehpur Sikri is a magnificent fortified ancient city. It was the short-lived capital of the Mughal empire between 1572 and 1585, during the reign of Emperor Akbar. The complex of monuments and temples, all in a uniform architectural style, includes one of the largest still-operational mosques in India, the Jama Masjid. The fort also includes three palaces, one for each of Emperor Akbar’s favorite wives. The fort is a masterpiece of Indo-Islamic architecture.

Doing it yourself is time-consuming and more importantly will cost you more given the number of things to see spread across central India. 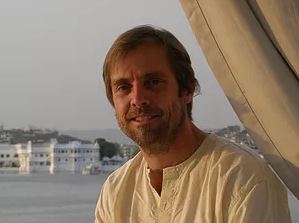 Steve Mannshardt of Magical Journeys Beyond offers an amazing itinerary which covers the tiger reserves, UNESCO World Heritage Sites and other top things to see in India.

The itinerary is fully customizable for 1 person or for large families, and is priced incredibly affordably.

Contact Steve with questions or for a no-obligation price quote for a customized trip to Incredible India.